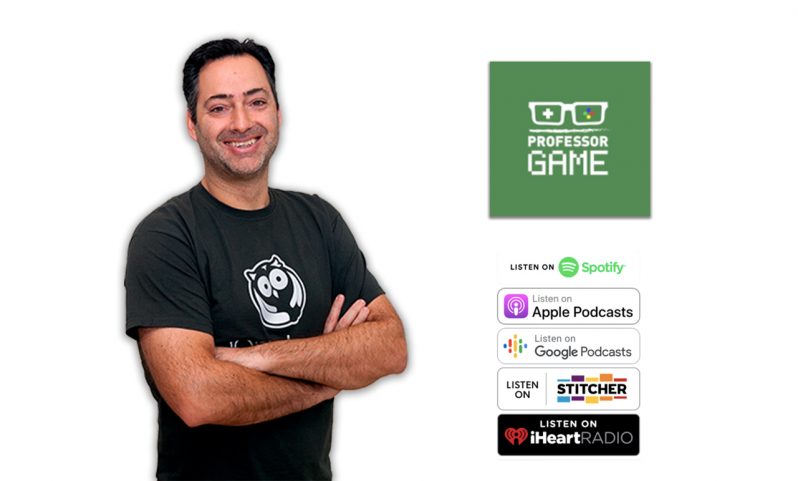 Rob Álvarez Bucholska is a professor at IE Business School in Madrid and a strong proponent of integrating gamification into academic and corporate environments. His passion for the topic led him to create and produce a podcast, “Professor Game,” which features weekly interviews with leaders in the field of gamification that shine a light on their experiences and ideas.

Of the many interesting conversations he’s had on his podcast, today we’ll be looking at his talk with Ibrahim Jabary, the CEO of Gamelearn. We’ve picked out some of the highlights from it below to help our readers get to know Ibrahim a little better, as well as understand his thought process and where his ideas come from as one of the pioneers of game-based learning. Ibrahim, after all, has been at the helm of Gamelearn, the market leader in video games for corporate training, since 2007.

R.A.: What does a typical day look like for you?

I.J.: I usually spend most of my days in meetings. I usually have two types of meetings: one related to the management of my team and the company, and one that has to do with video game design, which is the one I like most. Unfortunately, I can’t devote as much time as I’d like to this side of things.

So, during the day I am in meetings, then around six or seven when everyone else goes home, that’s when I really get into my actual work. That’s my time to hash out ideas and sketches for new games, and also to chew on any strategic decisions for the company.

R.A.: Can you think of any specific failure in your career that you’ve learned or improved from?

I.J.: I’ve made so many mistakes over the course of my career, it’s hard to pick just one. I’ve been able to learn from most, but one that jumps out is from the early days of Gamelearn, about 10 years ago, when I was designing our second video game. The game is called Triskelion, it’s our serious game on time management and personal productivity, and if I’m being honest, it was a nightmare. It took us over three years to finish (when normally a game would take a year or a year and a half), and I think we made two main mistakes, although there were many others.

The first mistake came from us outsourcing the technical parts, which ended up being an extremely inefficient decision. From there we learned that it’s much better (both financially and for our own sanity) to have our own team of programmers and engineers. After that, we never outsourced a core part of game production again.

The second mistake with that game was that, since our first game saw a great deal of success, we were too ambitious with the second one. It got a little out of hand and the first version of Triskelion turned out to be way too long and complicated for our clients. In other words, we got tunnel vision and became a little too focused on what we ourselves wanted the game to be as designers, and didn’t pay enough attention to what our clients wanted. From there, we learned to put the user experience front and center at every step of the way, from design to writing to production. After analyzing what our clients wanted, we decided to stick to games that were shorter and didn’t rely on mechanics that were complex just for the sake of being complex.

R.A.: Now, let’s shift to a nicer topic. Can you tell me about a success that your team had. Maybe something you set out to do that went really well from the beginning. And also, what lessons, perspectives, or attributes did you take from that success?

I.J.: It’s difficult to choose here too, because I have a lot of love for every game we’ve made — more than 15 since we started. I prefer some games over others, but sometimes our clients feel the exact opposite. It’s just a matter of preference, really.
However, my personal favorite is the first one, Merchants, our serious game on negotiation and conflict resolution. It was probably the most difficult one to design, mostly because we had nothing to go off of. We were a new company and the industry was new as well, so we didn’t have anyone to use as a reference. But that was part of what made it so exciting. Apart from creating the story, we had to build the simulators, which ended up working really well and really give the player the idea that he is actually negotiating with the characters in the game. In the end, we were able to offer our clients something really different, something they had never seen before. It was amazing.

Merchants also proved that game-based learning is a productive and sought-after learning methodology in corporate training. From then on, we knew we had something special. And we’re still on that same path today.

R.A.: Were you able to identify any key factors in the success of that video game?

I.J.: Well, Merchants is built on quality content. That’s key. Before starting the game, we had a really solid negotiation course to work from. That served as our foundation. Secondly, being able to create realistic role-playing situations in the game’s simulator was also a huge part of its success.

The challenge was making the player feel in control of each negotiation case presented. They were able to make their own decisions about how to approach them, which successfully broke out of the age-old mold of multiple choice questions in situations like these. And, we were able to make it work.

The game requires users to tap into their creativity in order to interact with their opponent and create nuanced proposals that achieve the player’s goal in the negotiation.

R.A.: When designing your video games, do you follow an established structure or framework or do you have your own?

I.J.: Since at the beginning we had no point of reference, we were forced to develop processes that work well for us. The most important thing is to have quality content. That’s the first step. You have to remember that you’re building a game to teach, so if your content doesn’t teach anything, you didn’t accomplish your main goal.

In our case, the first thing we do is try to boil down what it is we want the players to learn. Then, we think about how to present it and how we want them to practice it. Then, after we establish these two things (never before), we start to look at the game mechanics and story, whose primary function is to promote user engagement.

R.A.: Can you think of any best practices you’d like to share with our audience when it comes to creating your game-based learning solutions?

I.J.: I would say to follow the four steps mentioned above, making sure to never skip any. And, since any trainer should have their content down pat, I’d like to highlight just how important the story is. This is the primary factor in whether or not the student completes the course. It’s also a big reason why our completion rates are above 90% while traditional e-learning methods hover around around 20-30%.

R.A.: Finally, if you could suggest a guest for this podcast, who would it be?

I.J.: Well, he’s not really related to game-based learning, but he’s definitely someone I look up to when it comes to game design. That would be Tim Schafer. He worked for LucasArts and had a hand in many great video games like Grim Fandango and Broken Age. So yes, I would love to see you do a long-form interview with him.